NGOs from the Nature Conservation in Bulgaria coalition have been involved in games for millions by appropriating huge amounts of EU funds show a series of investigations by "Trud". Although there is a lot of evidence of the illegal activities of the "environmentalists" in the European programs, there is still no prosecutors action against them.

As "Trud" announced last week, only for the operational program Environment during the period 2007-2013 the European Commission has granted Bulgaria over BGN 210 million for the preservation of biodiversity. A big percentage of those funds have been absorbed by the “greens”. When you add to that the other channel for funding by the EU in the sphere of biodiversity - the Life program, the appropriated funds rise to half a billion BGN.

The huge funds have gone inside the pockets mainly of the NGOs connected to the Nature Conservation in Bulgaria - especially active were four of them. That’s the local branch of the Swiss offshore company World fund for wildlife (WWF), Bulgarian society for bird protection, Bulgarian foundation “Biodiversity” and Green Balkans. Toma Belev was part of the managing board of Green Balkans, as he was also its president in the period 2012-2014. At the same time he was he was head of the directorate of the Vitosha nature park, as well as the illegitimate boss of the Park association in Bulgaria.

According to the official data in the Information system for management and monitoring of the EU structural instruments in Bulgaria those four NGOs have taken part in tens of projects from the Environment program. Those four NGOs are also first in appropriating funds in the Life European program as well according to their website. More 90% of the projects are listed as completed but the effect for the Bulgarian nature and state is debatable.

The list of projects won by the "environmentalists" is very long, so "Trud" will draw the Bulgarian prosecutor’s office’s attention only to those whose funding is equal to the budget of a small municipality.

First are the Green Balkans who have access to solid EU funding. The project "Bright Future for the Black Vulture" from the Life program has a total value of EUR 3 483 411. Of these, the Brussels grant is EUR 2 607 648. The remaining money is secured from the project contractor. That is, Green Balkans and their partners had almost 1 million euros in order to win the project. 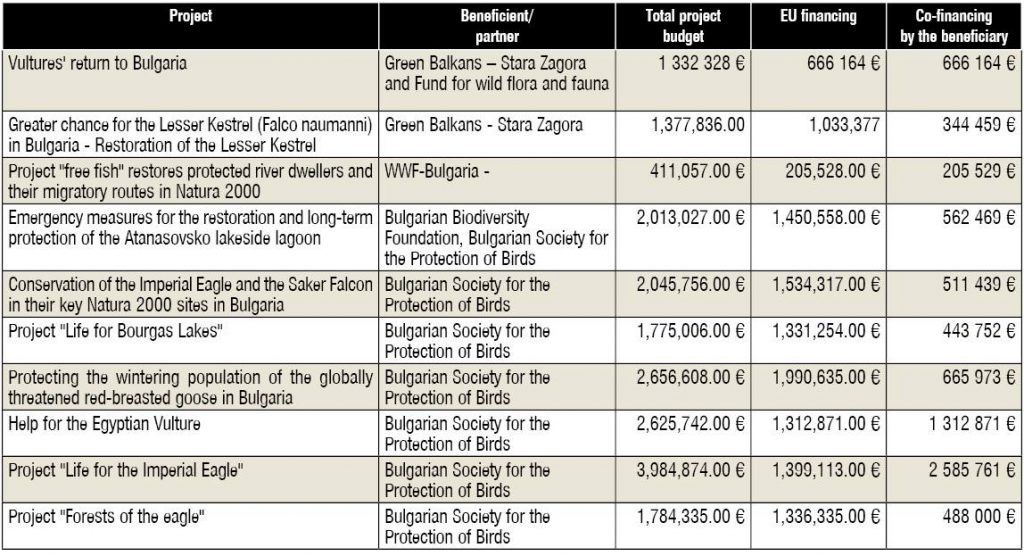 Two important issues arise. The first is the benefit of the project, despite its huge funding - the only news about a Bulgarian vulture is that such a bird, with markers made by our local ecologists, was caught in Yemen recently. The second question is how can Green Balkans afford to co-finance the activities with almost one million own funds for only one project.

The same is true for the project "Restoring the Populations of Large European Vultures in Bulgaria" - a total budget of EUR 1 332 320, aid from Brussels worth € 666 164. The rest of the money is given by the "environmentalists". At the end of the day, Green Balkans are running two vulture projects totaling nearly EUR 5 million. It turns out that this is the most valuable and important bird in Bulgaria. And the logical question arises - is not it all a smoke screen for draining money from European programs, without evidence of the activities carried out and the benefits from them. Green Balkans also participated in the restoration of the lesser kestrel species - the amount is EUR 1.378 million. But this NGO is just part of the huge appropriation of European money, through which "environmentalists" have been getting rich for years.

The Bulgarian branch of the swiss offshore WWF, headed by Toma Belev's wife, Vesselina Kavrakova, is also a beneficiary of serious projects. On "Environment" OP "Trud" will name two of them - "Implementation of activities from the National Action Plan for Sturgeon fish in order to improve the condition and preservation of sturgeons in Bulgaria" amounting to BGN 1 249 814. As well as "Limiting the negative impact of invasive species and restoring natural habitats through afforestation with indigenous species in the Srebarna Reserve - BGN 918 765. These are two projects with funding of over BGN 2 million. And there is a lot more.

In the team swallowing European funds, there are two more key NGOs from the Bulgarian Nature Conservation Coalition - the Bulgarian Biodiversity Foundation and the Bulgarian Society for the Protection of Birds (BSPB). The two together carry out "Emergency Remedies and long-term protection of the Atanasovsko lakeside lagoon” worth EUR 2 013 027. The BSPB managed to secure from -" Preservation of the Red-breasted Goose population in Bulgaria "- EUR 2 656 608 and from "Life for the Imperial Eagle" - EUR 3 984 874.

The results of the projects worth millions of EUR that the "nature conservationists" have accessed today are not clear to anyone but the "green" contractors themselves. In published vague reports on the NGO's websites, it is clear that there is a growth of the species they protect, but this is only according to their data, which is not proven. And for the most part, they are being challenged by independent experts.

It is publicly known that "environmentalists" use EU funds not to protect nature - this is a mask behind which political and personal financial interests are hidden. The Nature Conservation Coalition is one with the former political party "Greens".

This year, the formation was unnamed because it was finally convicted of having used the name illegally for 11 years. But currently "environmentalists" take part in the list of "Democratic Bulgaria" for the European elections and their campaign is clearly well funded."Environmentalists" continue to appropriate huge amounts of money from the EU, which they use for everything but not for the protection of the environment in our country. This will continue until the prosecution intervenes and stops the "green" lawlesness.

"Trud" has proven in dozens of his investigations that there is no project realized by the "green", which is of undisputed benefit to the Bulgarian nature and society. On the contrary, there are facts that need to attract the attention of the Prosecutor's Office. It’s hard to believe that there are problems in all other spheres that are immediately subject to inspections and the one where hundreds of millions supposed to preserve the environment disappear, everything is fine. Obviously, the state prosecution has serious reasons to address the shady activities of the "environmentalists" of the Euro-programs. When?